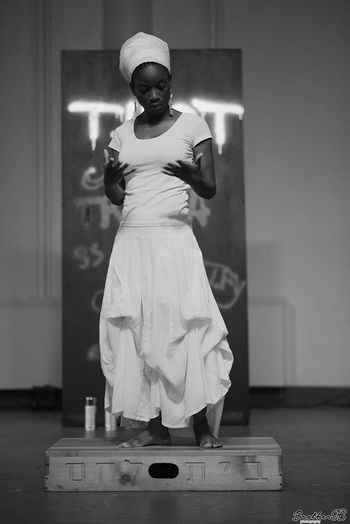 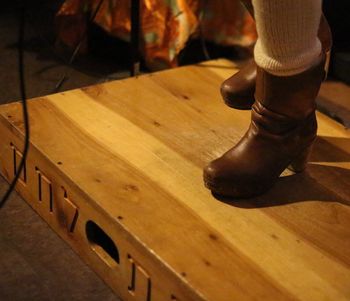 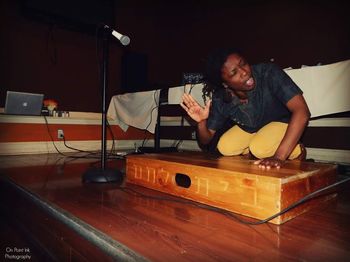 I first started combining vocals with percussion – vocussionism – in 2010, out of a feeling that I had more to say in a song than I could get out with just my voice alone, more I wanted to add to the story. So I started with handclaps, finger snaps, and stomping with whatever shoes I was wearing.

Regular shoes weren’t giving me what I wanted, weren’t cutting through enough, so I switched to tap shoes. I used them for a while, but soon realized that the metal taps didn’t produce the bass-ey sound I heard in my head.

One night at an Open Mic in Mt. Airy, Victor Puentes, a trumpet player who came in from time to time, saw me do my vocussionism thing and suggested that I get a Tarima – sort of a platform drum - made. I’d never heard of a Tarima, but as he explained I instantly became intrigued, and wanted to know more.

Victor introduced me to his uncle Polo Ramirez, a carpenter, and Polo offered to build one for me. As we sat in his place drinking coffee and tea, discussing options and making plans, she – my Tarima – started to take shape in my mind. We decided that she would be 2 by 3 feet - big enough for me to perform on yet small and light enough for me carry on SEPTA or put in the back of a car.

I wanted the best for her, so I asked if she could be made with Mahogany. Polo explained that she could, but that she would be expensive and heavy. Expensive wasn’t in my budget, and heavy wasn’t for me, so I asked Polo what other woods she could be made out of. He suggested poplar for the top, and pine for the sides. Poplar struck a chord with me, but I didn’t immediately know why.

The connection with poplar came when Terri "Night Owl" Lyons, a mentor and a lovely lady, was trying to help me reach a deeper feeling and higher sophistication with my music.  "Baby it's in you!” she’d say, “you just gotta be exposed to it". She was talking about great jazz vocalists, namely Billie Holiday. "Strange Fruit… black bodies swinging in the southern breeze, strange fruit hanging from the poplar trees". The connection was made, and I got chills.

And so I picked her up from her maker Polo Ramirez March 28, 2013 and we have had quite the journey together. Her mother is a soap box people stood on in parks and on street corners to preach or deliver a fiery political message. Her grandmother came from Spain, where women danced the Flamenco on her from dusk to dawn. Her great-grandmother is the dockside auction block America sold some of my ancestors into slavery from. Her only tattoo is my name – Bethlehem – which I wrote on her and Polo carved in. She is the house of bread from which I feed people with my music.

She’s had hundreds of shows and a few coats of shellac since then, and as we approach our 5th year together I couldn't have asked for a better more appropriate, powerful and truer companion.